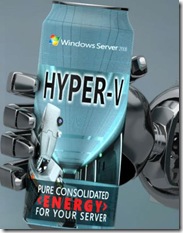 Leave a Reply to Hyper-V PowerPack out « Dmitry’s PowerBlog: PowerShell and beyond Cancel reply